Fall actually hit Montana while I was gone so I woke up to frost this morning for my bike ride to work. It was glorious. I just returned from my whirlwind half marathon tour yesterday so I am pretty tired, but very glad to be home. Three great races and lots of fun seeing new places and old faces in all four Lower 48 timezones. This week I have a bonus post for you! I actually thought of this idea last year, but never got around to implementing it, so I decided I should definitely get it done this year.

Pumpkin pie is one of my favorite pies and I will happily eat it all year round. Unfortunately M doesn’t super care for it so mostly I just make it in the fall when I don’t mind having it for breakfast all week (yum). It’s a traditional dessert this time of year, which can be boring (according to some) so I thought I’d try giving it a new package.

I used my normal pie crust recipe and pie filling recipe, and then used mason jar rings to form little pies. The jack-o-lantern faces make them great for Halloween but with a different decoration (like the leaf cutouts below) they’d be great for any fall potluck. They are way easier to serve and eat which makes them great for when you aren’t having a sit down dinner. They do have a high crust to filling ratio, so make sure you use a crust recipe that you like; I have mine linked below if you don’t already have a favorite. 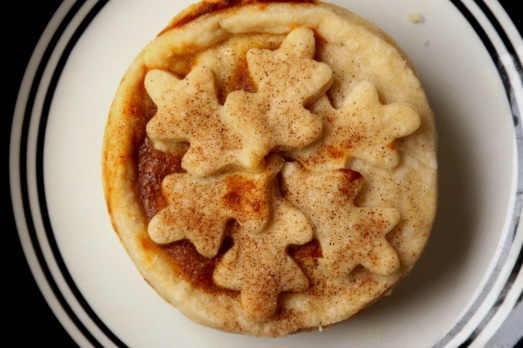 They are a little time consuming, especially if you cut out faces, but not difficult and I’d say pretty beginner friendly. I got 9 out of my recipe but that could vary based on how thin you roll your crust and how many times you are able to reuse the scraps. (I wouldn’t recommend more than once or twice as the dough gets very tough the more you handle it. Tip: you can drip a little extra water to help the scraps stick together again to re-roll.) 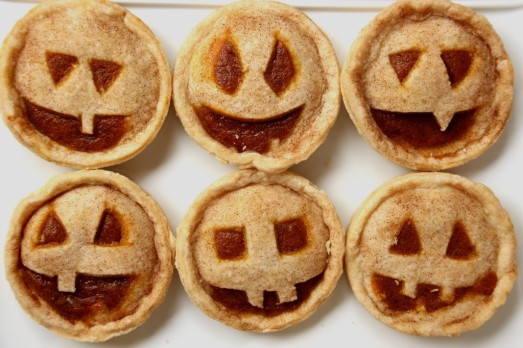 Your usual pumpkin filling, yummy pie crust, and a dusting of cinnamon sugar makes a great treat that’s easy to portion control and is a wonderful whipped cream vessel. The cuteness is an added perk. =)

If you need a dessert for your Halloween parties this weekend, give these a try.

Phew. Okay kids, I promised you sugar and here it is. All of it. So much.

The other week Pinterest lit up with these brownie Oreo peanut butter cupcake delights. The ones I happened across didn’t lead to a recipe, but it looked pretty straightforward. All I needed was a reason to make them because I certainly wasn’t going to eat 18 of these babies. Luckily, my work had a charity bake sale and these immediately came to mind as something I could donate.

Due to the brownie mix (which is one of the few things I’m okay using a mix for), these come together simply with relatively little time commitment and are easy to transport for parties. But let me warn you, they are rich! I am not normally one of those people who thinks thing are too sweet (I can eat chocolate pudding pie for daaaays) but these take it to a whole new level. I also don’t typically eat packaged candy (which is probably part of why it’s a bit overwhelming to me) but I made an exception for these. 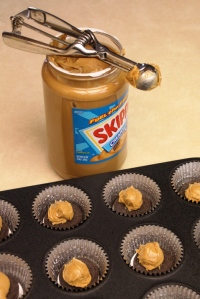 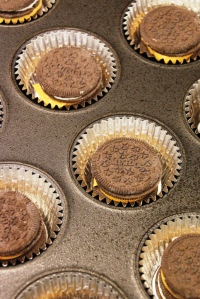 With a glob of peanut butter sandwiched between two Oreos and surrounded by brownie, these things do not mess around. Maybe you only want half of one, maybe you want five, I don’t judge. The fudgy-ness of a brownie, the crunchy-ness of an Oreo, and a smooth peanut butter filling give you all the textures you could want in one chocolatey bite.

I topped mine with some Reese’s peanut butter chips for some added flair, and because I always have them on hand anyway. Totally not necessary but they do look prettier that way, and as we all know: you do eat prettiness.

These would be great for an upcoming Halloween party (maybe cut them in half for kids) if you want to get away from all the pumpkin flavors. (If you don’t, my pumpkin ginger cupcakes are amazing, not that I’m biased.)

1 I used the Ghirardelli brownie mix that Costco sells, but it would be much easier to use a mix that doesn’t have chocolate chips/chunks in the batter.

2 You may have a little leftover brownie batter, just bake it in additional liners, filling each about 2/3 full. Great for brownie sundaes after you’ve given all these away.

Fair warning, I never tire of pumpkin. I’ve already made my 2nd pumpkin pie of the season and I’m sure there will be a 3rd involved at Thanksgiving. As pumpkin pie is equally good for breakfast as it is for dessert, I don’t mind having a whole one to myself and happily eat it for several days in a row. I greatly look forward to Operation: Eat Everything Pumpkin! (which takes place annually between October and December) and do my best to mix in some new recipes along with my old favorites. If you’re looking for a slightly less traditional pumpkin dessert to serve this Thanksgiving, look no further. 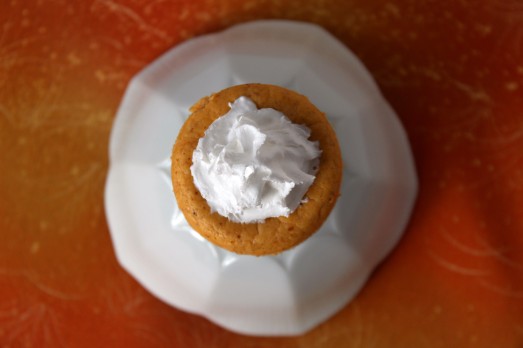 Traditional pumpkin and classic cheesecake come together in a wonderful dessert sure to please pumpkin lovers and cheesecakes fans alike. Even my boyfriend, who isn’t a huge fan of pumpkin, thinks these are pretty delicious. Smooth, creamy, and rich, it could very well become a new annual favorite. Even better, the mini size makes for ready to go individual servings and lets you enjoy the evening instead of attempting perfect slices with all eyes on you. These pop perfectly from the pan, and are excellent plain or with a swirl of whipped cream.

This recipe does require a specialty pan, of course, but if you have room in your cupboards you surely won’t regret the purchase. Mini cheesecakes are great for potlucks, large dinners, and dessert parties because they’re easy to transport, quick to serve, and require no utensils to eat (although I do prefer a fork, myself.) However, if all you have is a regular cheesecake pan, head over to the original recipe to see instructions for a standard 9″ cheesecake. I’ve not made the full version [yet], but I’m sure it’s equally amazing.

So whether you try some new recipes or stick with the tried and true favorites, have a wonderful Thanksgiving weekend. (Or a wonderful regular weekend, for my foreign readers.)

1 About 6 graham crackers.
2 The original recipe calls for fresh, but dried works just fine.
3 A flat-bottomed shot glass works nicely for this, but use your fingers to make sure the edges are well sealed.
4 The cheesecakes keep well in the fridge for several days, or in the freezer for up to two months. They’re a great dessert to have on hand! Store in an airtight container.

Much like the rest of the 20-something white girl population, pumpkin is my favorite fall flavor. October is a highly anticipated month as I count the days towards what I officially call “Pumpkin Season.” Granted, this date is completely arbitrary, but since Bozeman summer generally extends well into September anyway, October 1st seemed a good choice.

Since I’ve already posted my favorite pumpkin bread, pumpkin pie, pumpkin cupcakes, and pumpkin milkshake, I sought a new recipe to share this year. A Pinterest post led me to these donuts, which I ever so slightly adapted to fit my preferences. A moist and pleasantly spiced pumpkin donut topped with a cinnamon glaze is the perfect start to a fall morning. As this is a baked donut recipe, it does require a donut pan, but I promise you won’t regret the purchase. My one complaint about my pan is that it only holds six donuts, when all recipes make twelve. (First world problems, haha.) 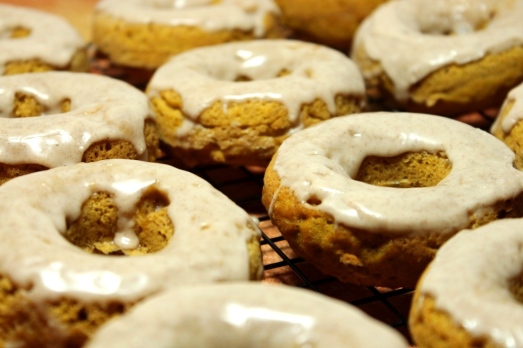 These would be a great way to kick off Halloween morning, sharing them with family, friends, or coworkers. Like many of you (I’m guessing), I already attended a Halloween party this past weekend, but maybe there’s a day-of party happening Thursday, or you just want to make something easy this fall. Whatever the occasion, these donuts are an easy way to bring the pumpkin flavor to breakfast.

Did you have a costume this year? I dressed up as Donatello (the Ninja Turtle, not the Renaissance artist), using a costume my mom made my older brother when he was five. That makes this costume almost as old as me, but still amazingly awesome.

Heroes in a half shell – Turtle Power! 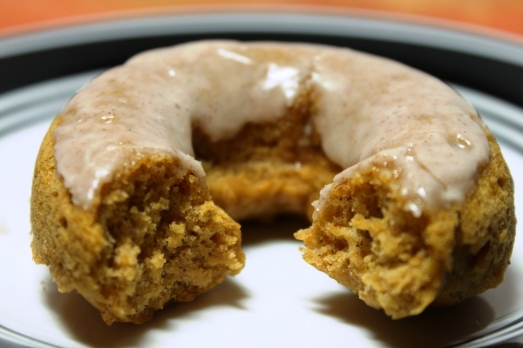 1 These taste great made a day in advance, but the glaze tends to soak into the donut. If you can, glaze them on the day you intend to serve them so they’ll stay nice and pretty.