Despite the huge amount of effort involved, peach pie is one of my favorites. It’s a summery flavor that’s delicious all year round, and is a great way to use those large trays of peaches I can’t seem to help buying from Costco. The hint of cinnamon present is always a welcome flavor in my book, and a dash of nutmeg adds a little something. As one of the sweeter pies, it’s definitely a dessert pie to me, but I’d never turn it down for breakfast. 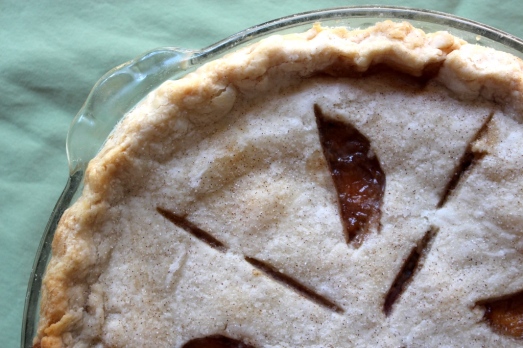 Fresh peaches are admittedly a pain to work with, but it’s oh so worth it in the end. If you’re on top of things, peel and slice enough peaches for several pies and freeze them in pie quantities for later use. Just make sure you let them thaw before you use them, and maybe add a little extra flour.

Never peeled peaches before? You’re in luck – there’s an easy way! Set a large pot of water to boil (not a rolling boil, more like a strong simmer) on the stove, and place a bowl of ice water nearby. I like to put a colander in the sink as well but that’s up to you. For each peach, submerge in the boiling water for about 30 seconds, then immediately dunk in the ice water for another 20 seconds. With a paring knife, cut the peach (around the pit!) into 8-10 sections. The skin should just slide off the fruit during this process, but if it’s still sticking you can redo the boiling/ice water baths. Keep in mind, however, this will only work if your peaches are ripe enough. Throw the slices in the colander, the skins in the disposal, and the pit in the trash, and you’re good to go! Repeat for all your vast trays of peaches as you revel in how easy it is while wasting no delicious peach. You can definitely take the skin off before slicing the peach, but skinned peaches are ridiculous slippery, so I prefer the extra grip while I hold it.

As summer winds down, this is a wonderful pie for a “last hurrah”; saying farewell to summer with fresh peaches, and welcoming fall with that hint of cinnamon.

Pastry for a double-crust pie