Just kidding, until last weekend it has mostly been pouring rain and howling winds here. I will admit it’s made for some pretty challenging runs during my marathon training. Turns out 20 miles in drenching rain and/or 20-mph headwinds is not super awesome. I know, shocker. Regardless, around March I started thinking about lemons again, partially because my grandmother loved lemon meringue pie and her birthday was in March, and partially because Costco starts carrying giant bags of the wonderful yellow fruit around April. With the closing of ski resorts and the flowering trees, lemon just seems like the right flavor for the season. 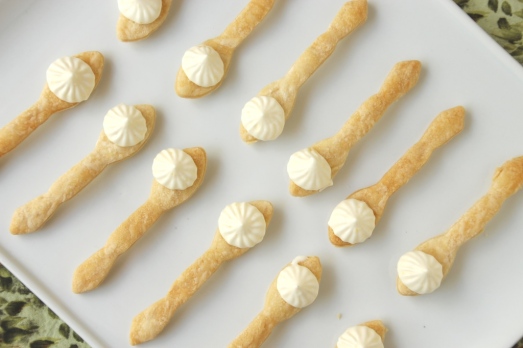 After making a large batch of granola, I was left with several egg yolks chilling in my fridge. My usual go-to for egg yolks is just to throw an extra one in scrambled eggs, but I didn’t think I’d get through them all that way very quickly. Secondary method is always pudding, but pudding sounded a bit heavier than the dessert I was really looking for. Enter: mousse! 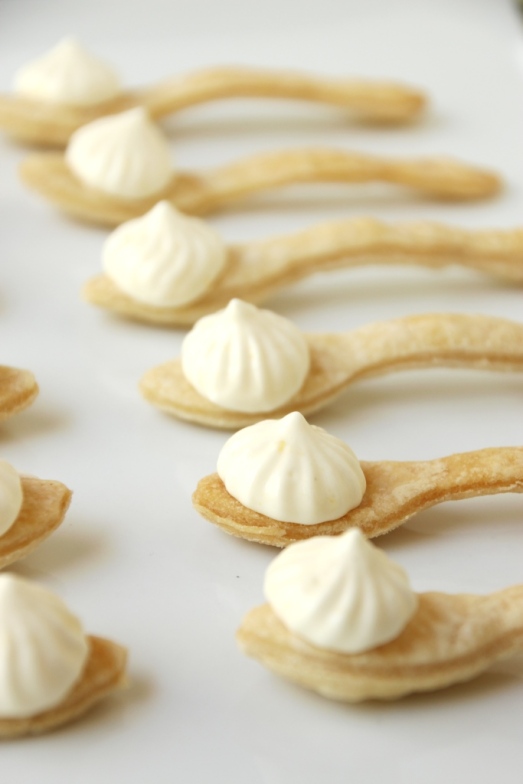 Substantially lighter in texture without compromising the ka-pow of flavor, mousse always feels like the summery version of pudding. Obviously lemon was the way to go. I cut Mandy’s recipe in half, very slightly adjusted it, and was on my way to a tasty treat. Her recipe called for a graham cracker crust that I’m sure is delightful, but I wanted to test an idea I’d been pondering.

Last fall I’d seen some great ideas (on Pinterest, of course) using cookie spoons, which I thought were super cute. However, I am not a huge fan of sugar cookies and even more importantly, I don’t enjoy making them. I was curious whether the same idea would work with pie crust, and that seemed like the perfect delivery mechanism for lemon mousse.

After texting my mom and asking whether she thought my spoons are oven safe (which I’m sure made her raise an eyebrow), I made some pie crust, made a mini spoon template with parchment paper, and begin cutting away. They baked up super cute and although they are a bit fragile, they work great for a dollop of mousse or for dipping. Although it didn’t take terribly long to cut by hand, for round two I bought a cookie cutter on Amazon, which was not only faster, but allowed me to be more efficient with the dough. Plus now I have a reason to make more spoon desserts.

These lemon pie spoons are small, light, and require no cutting and slicing and plating, which makes them great for potlucks. Big lemon flavor and flaky pie crust come together in a delicious bite-sized treat. It’s important to use a pie crust recipe you like the flavor of, as it’s rather prominent given the somewhat higher crust:filling ratio. I’ve linked mine below, but feel free to use your own. 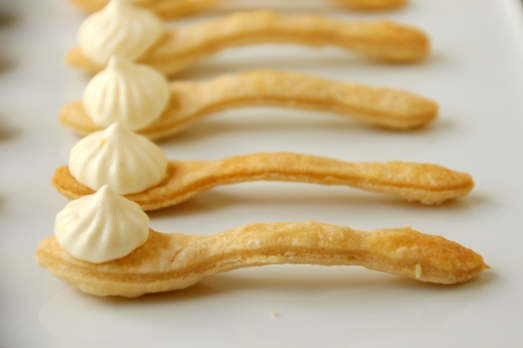 This would be a fun confection for a summer barbecue where you don’t want to worry about fridge space. You can make the spoons and the mousse a day or two ahead of time (store the spoons on the counter, and the mousse in the fridge), then assemble shortly before you head to the party. They’ll be fine on the counter (inside, if it’s hot) for several hours, leaving you free to enjoy the party. Although they might droop a bit, they are definitely safe to eat.

Fair warning: they are addicting! Make a batch to share, assuming you don’t eat them all yourself.