As the weather warms there is a tendency to put the slow cooker away in favor of barbecues and chilled salads. While I am 100% in favor of both those items, I also think summer and winter can share the slow cooker equally well. Hawaiian meatballs and enchilada quinoa are both delightful summer meals and the slow cooker not only presents its usual ease of use, but also saves you from standing near a hot oven or stove.

This week we can add a recipe to your summer repertoire with another Mexican favorite: fajitas. Possibly my favorite dish at Mexican restaurants, fajitas are consistently delicious and even more consistently rarely contain ingredients I don’t like. As someone with a strong aversion to raw tomato and cilantro, and a mild distaste for avocado, dishes from south of the border can be a bit challenging. (You can only tell the waiter to leave so many things off your tacos before they give you The Look.) Fajitas and enchiladas are my go-tos there, and these are a new go-to at home. 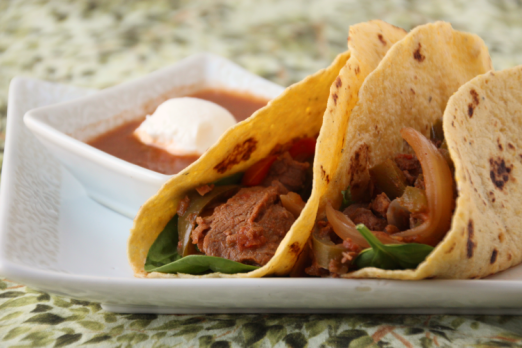 With just a few simple ingredients and most of the prep time involving slicing meat and veggies, this recipe comes together in minutes and can be left to its own devices all day long. Up the heat with additional peppers or spices, or leave them out for an extra mild version. I like to use a variety of bell peppers to add some flair, but any of the colors will do. Make a batch of this DIY fajita season or use a store-bought version – whatever makes sense to you. I like to whip up my own so I can up the garlic and lower the salt, but any fajita or taco seasoning will do just grand.

Tender meat and plenty of peppers fill out a tortilla with lots of flavor – I like to use a corn/flour blend but any fajita-size tortilla is great. These are perfect just as is, but I like to add some spinach, salsa, and sour cream for a few toppings. Sprinkle with hot sauce for an extra kick!

These make a lot which is great for a crowd or for meal prep. M liked these so much for lunches he requested them two weeks in a row. For a man who rarely gives me feedback beyond “it was pretty good”, this is praise of the highest order. As a bonus, they are super easy for me to throw together while I prep my own lunches for the week. Pack a container of meat, whichever toppings you like, and a couple tortillas and you are set for an easy lunch to reheat. For the low-carb crowd, serve over a bed of cauliflower rice and greens for a fajita-bowl instead. 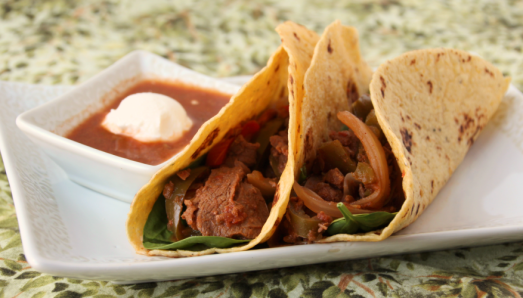 Slice up some meat and veggies and all you have to do in the morning is stir it and go. Plus, coming home to pre-made fajitas gives you plenty of time to blend some margaritas on the side – Fajita Friday anyone?

15 oz can tomato sauce
2 jalapeños, diced (or two, 4 oz cans)
2 Tbsp fajita seasoning (below, or use your own)