About five years ago I discovered my favorite green smoothie, which I basically lived on during an extremely hot and smokey summer in Helena. I was admittedly liberal with the peanut butter and a bit light on the spinach, but overall it was a decently healthy dinner option for those days I didn’t want to eat anything warmer than ice.

Over the years I’ve lightened up my original recipe, opting for coconut or almond milk instead of cow’s and substituting PBFit peanut butter powder instead of the real deal. Peanut butter powder may sound silly, but in baking or smoothies I actually prefer it over the original. The peanut flavor is a bit more concentrated and it really lowers the amount of calories and fat. I’m not a calorie counter by any means, but it makes it much easier to create a snack-sized version while keeping all that wonderful peanut flavor.  I’ve also probably doubled the amount of spinach I use, since I’m now inclined to add it to almost anything from smoothies to soup to scrambled eggs, and it’s definitely my preferred salad base. The spinach only vaguely modifies the flavor but gives a big nutrient boost – presuming you don’t mind the crazy green color. I admit it’s a bit off-putting to the uninitiated but I’m so used to it that this smoothie without spinach now looks and tastes strange to me. 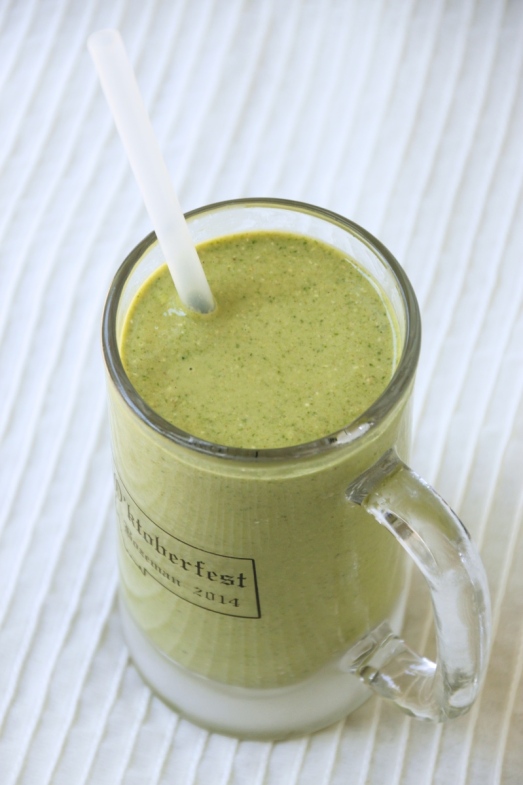 During the summer and fall I participate in tons of running events, where you have to get up stupid early in the morning in order to make it to the start line or bus pickup on time. My usual race day breakfast (or really any day breakfast) is oatmeal with banana and PBFit, but on the days it’s too hot for that I opt for this smoothie instead. They contain basically the same ingredients, with the smoothie having that extra spinach boost. It goes down much easier when it’s already 75 degrees or more, and takes just as little time to prep in the morning.

I like to pre-grind the oatmeal so there aren’t large chunks clogging up my straws, but it’s not strictly necessary if you have a really quality blender. The oatmeal not only adds some calories and makes the smoothie more filling, but I really enjoy the hearty flavor it adds to the palate. It’s not overwhelming but reminiscent of an oatmeal cookie, and is still pleasant for people who necessarily enjoy oatmeal on its own.

This smoothie tastes like a peanut butter banana milkshake but is a much healthier way to start the day. With the addition of oatmeal it sticks with you for quite a while, making it perfect for both pre-race and post-race. It’s also a pretty legit dinner for those days you’re feeling lazy or in a hurry but still want something on the healthy end of the spectrum, and your boyfriend isn’t around to insist smoothies are not a real dinner.

1  For a lighter smoothie I just leave out the oatmeal; this is great for the days you want a lighter breakfast or a healthier snack/dessert later in the day. But for an entrée smoothie the oatmeal adds great flavor and makes it a lot more filling!

2  I typically slice mine into roughly eighths as they fit into my single-serving blender cup better that way. You can slice yours more or less to suit your needs.

3 I like to put a bunch in the freezer and then crush it all once it’s frozen. Then it’s really easy to measure out a cup or two for each smoothie on the fly.