My favorite part of Thanksgiving (after friends and pumpkin pie) is the copious leftovers. Turkey isn’t actually my favorite on its own, but it’s one of my favorite sandwich/wrap fillings and I always look forward to a few days of tastiness. My go-to is a wrap with warmed cream cheese, cranberry sauce, and turkey, and then stuffed with some extra leafy greens. All the best flavors of Thanksgiving dinner rolled into one, and even a salad to boot. (Don’t worry, I probably already had the pie for breakfast.)

Last year I made homemade dinner rolls to take to our annual potluck, and ended up with quite a lot left over. It seemed prudent (and delicious) to utilize those instead of my standard tortillas, and as such the Thanksgiving slider was born.

Creamy mashed potatoes, moist turkey, and tart cranberry sauce are cozied up between fluffy bread, and it’s possibly my new favorite “leftovers” meal. A perfect contrast of sweet and savory, and a mouthful of delicious in every bite. I love this recipe because you can quickly make just one or two in the microwave, or you can heat up an entire pan in the oven. Admittedly the oven method is a bit slower, but with a little effort and a bit of patience you can have a meal for the whole family.

An added bonus of this recipe is obviously that you can add basically any leftovers you have around. Extras on the cheese platter? Go for it. Still a tureen of gravy in the fridge? Drizzle that on. A few green beans or carrots taking up space? Add those too. Nearly any Thanksgiving recipe could have a home here, it’s just a matter of your personal taste. 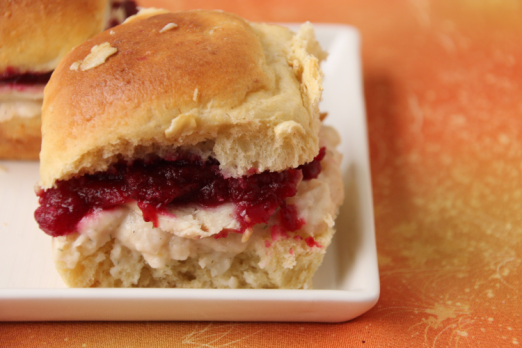 While using homemade rolls is delicious, you can certainly pick up some extras of the store-bought variety to prepare. Add a side salad and you have a perfect (and lighter) day-after lunch or dinner all ready to go. You can probably even convince any leftovers-haters in the house to partake without complaint.

Kick back, avoid the Black Friday crowds, and enjoy your favorite flavors of Thanksgiving in a new twist.

If you’ve been eagerly awaiting the pie the inspired the apple cranberry sauce from two weeks ago…this is it. You’re welcome.

For the past couple of years, M and I have attended a huge potluck feast rather than having a tiny Thanksgiving all to ourselves. This is fantastic for being able to eat many different dishes without having to cook them all, but does have the downside of often eating things at room temperature, regardless of what their ideal temp might be. There are always numerous pies in many different flavors, and going home hungry is pretty much impossible. I usually contribute to the event with homemade dinner rolls, but I may switch it up this year.

Despite the multitude of desserts, I always personally bake pies just for the two of us. M doesn’t get excited about pumpkin pie (weirdo) and apple is typically his flavor of choice. Last year, I found an apple cranberry pie that sounds amazing, and, (with M’s blessing), opted to make that instead. I don’t hate plain apple pie by any means, but there are many other flavors I consider to be much more enticing.

I will never give up my pumpkin pie, but for a fresh flavor, this might be a new fall favorite. Traditional apple and cozy spices are complemented perfectly by the tart cranberries. It lends a more complex profile without being overwhelming, and still works just as well for both dessert and breakfast as your traditional apple. I’ve always been partial to the more tart fruits, and the addition of cranberries here is a wonderful update. A little almond extract completes the whole experience. 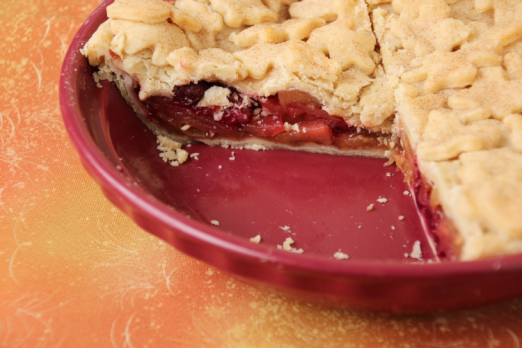 As a bonus, the cranberries also add some beautiful color to your place. Bright red cranberries make the dessert table more festive both in flavor and presentation, and you can really up the ante with some fun pie crust cutters. Arranging leaves is way less tedious than a lattice crust, and even more impressive looking; a win-win situation in my book. Paired with homemade cinnamon ice cream or cinnamon whipped cream (recipe included), the tart pie and creamy topping are a perfect end to any fall day. 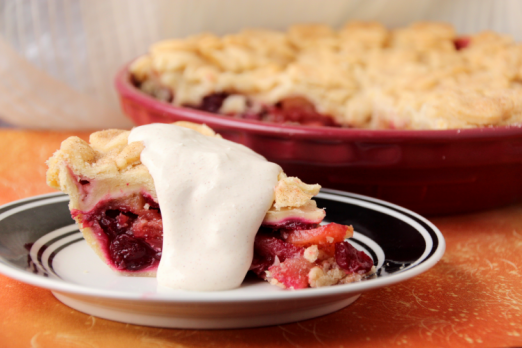 If you’re looking for a way to add some flair to the table this year, look no further than this pie. It’s sure to be a hit, and maybe even a new holiday tradition.

pastry for a double-crust pie

1 You can make the whipped cream ahead of time and store it in the fridge, but you may want to whip it again just a bit before serving as it tends to loosen over time. It only takes a couple of minutes so I typically just make it on demand.

Likely from here through Christmas my posts will be pretty seasonal, but also more abundant. Hope you enjoy the plethora of holiday options!

Of all the dishes weighing down a typical Thanksgiving table, cranberry sauce is one of my favorites. I love all the more sour berries and a nice tart cranberry sauce is a lovely addition of color and flavor to my plate. As a kid I’d often take seconds and thirds just of cranberry sauce, and adult me is not much different. The perfect cranberry sauce is different for everyone, and the key to happiness is making it yourself so it’s just right. Maybe you’ve always been an out of the can sort of person (no judgements!) but I encourage you to try the from-scratch version this year.

Cranberry sauce is one of those things I’m absurdly picky about, and it’s rare that someone else’s recipe really strikes my fancy. I need all the cinnamon and none of the orange, thick and chunky and not too sweet. I’m not sure why orange became the traditional flavor pairing, but I personally think it too easily overpowers the rest of the flavors.

Inspired by a pie last year (check back in two weeks for that), I tried utilizing apple instead. It complements the tart cranberry perfectly, without becoming a prominent flavor. Instead of it being an obvious addition, the apple blends more smoothly into the whole profile, adding a little something without necessarily being able to pinpoint it.

I added a smidge of almond extract to round out the holiday experience, but you can certainly use vanilla if you prefer. Almond is a nice twist on tradition without straying too far from comfy, and I often utilize it in fruit pies in lieu of (or addition to) vanilla extract.

This is definitely my new go-to cranberry sauce recipe, and I’m already looking forward to making it again in a few weeks. It’s excellent both chilled and warm, resulting it an excellent make-ahead recipe. Large enough to share or to enjoy copious leftovers, so long as everyone doesn’t serve themselves the same heaping amount I tend towards.

If for some reason you’re hesitant on the apple, or want to keep to a more traditional flavor, just leave that out. It’ll still be an excellent spiced cranberry sauce with a little almond boost.